Making a game set in a kitchen can be strange. While there may be earthquakes and snow storms and yes you might find yourself sliding about on the deck of a pirate ship, this is still a game which is, at least loosely, emulating a real life career.

[In space no-one can hear you crying on the toilet]

Teamwork is at the core of our experience, just like in real kitchens, players will take on different rolls and work together to ferry out each new order. You’ll pitch in and help out when there’s a sudden rush on onion soups, you’ll wash up plates when you find yourself running low and yes you’ll spend a lot of time shouting at one another. 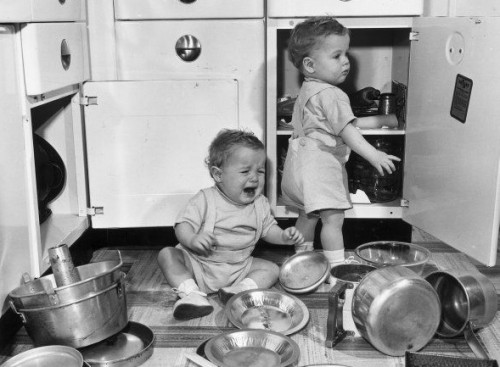 There are obvious similarities with the experience of working in a real kitchen and it’s something we’ve heard from real working chefs who have played the game:

Before any conventions and before Overcooked had really begun full production, my girlfriend (for my birthday) had booked us a table at The Ledbury (a rather swanky restaurant in West London and proud recipient of not one but two michelin stars). We had a fantastic time, the staff were great, the food was incredible and they even allowed us a sneak peak into their kitchens downstairs: It was chaos. At least 20 chefs were packed into this tiny space all clamouring over one another to keep on top of the orders from the restaurant above and deliver the top quality food which they were all so clearly proud of. It was busy, it was loud and it was frantic. The similarities with the game we were creating were all too obvious.

[Like Disneyland only with more stainless steel and sharper knives]

But it wasn’t just similarities with the game that I saw, I also saw how similar the process was to our game’s development. When we’re working on a new feature, when we’re working late into the night adding new code and new art, tripping over one another to get everything in and working as best we can, feeling the stress mount as tasks start taking longer than you’d anticipated or when your software freezes up and you manage to lose an hours work. In life, as in kitchens you start to question what it’s all for and is it really worth all the stress and hard work you’re putting in?

Anyone who has ever (successfully) cooked a meal for a group of their friends or family should be able to tell you why they do it. When you’re done sweating over the stove, when you’ve served up each plateful and you’ve finished apologising for the state of the peas, there’s a wonderful sense of fulfillment that comes from sharing your creation with others. Watching their worldly woes fall away, at least for a moment, as they tuck into the bountiful spread you’ve laid before them.

Creating anything can be challenging. As Tom Hanks says in A League of Their Own “If it wasn’t hard, everyone would do it. It’s the hard that makes it great.” and he’s right, well sort of, baking a cake can be hard, but you’re hardly going to throw it away when the hard bit’s over. It’s that feeling of accomplishment, of sharing your creation with the world that makes it worthwhile. I never wanted to create games in a bubble, there are some people who don’t mind making games that no-one will play, or sacrificing quality for a paycheck, but most people want people to play their games, they want them to enjoy the games they make as much possible.

In the best kitchens you’ll always find chefs who take a great deal of pride in their work, that want to create delicious meals not for themselves, but for the hungry customers on the other side of their wall.

And if they give it their all, and they still all get food poisoning well, there’s always tomorrow night.

Alright one more gif, but don’t let it spoil your dinner!